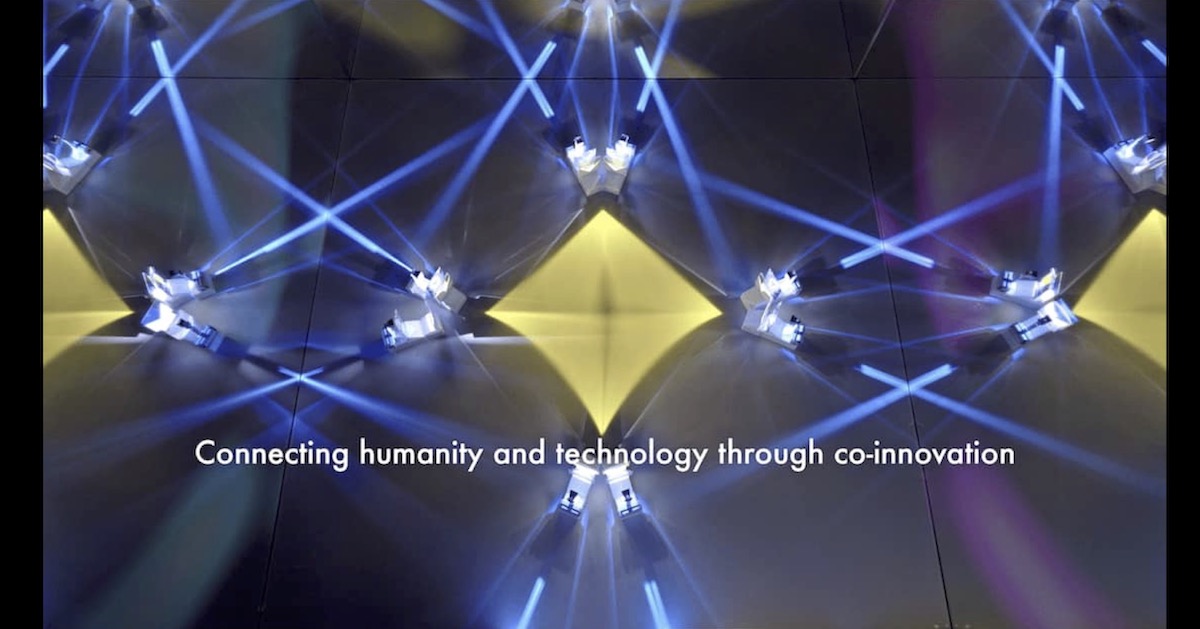 Project Overview
A video visualization of Yokogawa’s corporate brand slogan and the message behind it, expressed through 25 wirelessly controlled, self-propelled cubes that moved in sync to form the Yokogawa trademark.
The cubes’ movements represented not only Yokogawa’s power of precise measurement and control, but also their commitment to being a node of business and industry that creates new value by connecting humanity and technology.

Software
CG software was used to evaluate camera angles, cube number, grid size, and create video content. Based on this data, we sequenced the movement of the 25 individual cubes in a CG simulator. We also developed a framework that facilitated control of cube movement, rotation, and speed via Bluetooth by replaying the CG simulator in real-time when filming the video. The system accommodated projections to guide filming and the ability to export the sequencing used in the synthesis of AR scenes.

・CG Simulator
A CG simulator allowed us to evaluate the optimal camera angle for each shot, as well as determine and transmit data regulating the individual movement and control method of each cube. The simulator also facilitated the creation of projections to guide filming and the output of sequencing used to synthesize AR scenes. Replaying the simulation in real-time, we sent position, rotation, and other filming sequence data to each cube via Bluetooth.

Hardware
For the autonomous cubes, we adapted the toio™ Core Cube, a toy robot made by Sony Interactive Entertainment. We modified each cube with a variety of “gimmicks.” While the cubes thus each played an independent role, the system was customized so that these individual movements were oriented in service of a unified goal. We created a transceiver device that regulated this cube fleet via Bluetooth. In the final scene of the video, the cube fleet moved into just the right configuration such that the light was manipulated to project the Yokogawa logo on the floor.

・“Gimmick” cubes
– Spotlight cubes
Each “spotlight cube was equipped with a high-brightness LED, a lampshade, and a battery. The LEDs were affixed to a raised stick in order to shine down on the floor from above. The design required a high degree of precision and balance to prevent the cubes from toppling over when in motion. The frame was made from injection-molded and machined aluminum. The lampshade was 3D printed.

– Polarizing filter cubes
Polarizing filters were used to block out blue light and convert the spotlight beams into the yellow Yokogawa logo. The cubes were also outfitted with V-shaped masks that created the rhomboid logo’s sharp points.

– Lens cubes
Injection-molded frames mounted with custom rectangular cylinder lenses made from machined acrylic. These lenses condensed the beams from the spotlight LEDs, resulting in a brighter, well-defined logo.

– Camera cubes
Although these cubes did not appear on screen in the finished video, they were equipped with cameras used to film a portion of the scenes. Having the cameras themselves move as part of the system enabled us to dynamically capture the action from the perspective of the cubes.